on May 16, 2011
Pals, it's my first time writing about culinary experiences. Yes, i admit that i write too much about personal life and it makes me hungry. now i am writing about what i like most : food !! fyi, i am writing with mouth watering like a waterfall.

Yesterday afternoon, my cousin and i went to Iga Bakar Yogya at Jalan WastuKencana. You can go directly from BEC and turn right when it comes to a junction. it's located on the left side of the street. There's Iga Bakar Yogya, next to Seafood Bali.

At first, the restaurant seems little different because its open kitchen next to the parking area. But don't worry, it's not really an open kitchen so the blower won't disturb our nose. When i stepped inside, the interior is quite good. Simple and well-organized. the chairs are made of wood and the chair is a long one type like i always used to sit when i was in elementary school. So i concluded this restaurant is not that focused on customer's comfortability because i won't feel comfy if i wanna sit all day long in that restaurant. But don't worry, there's some magazines and wi-fi available there.

after couple minutes of waiting, i forgot to take very first pictures of it, yeah, it's half eaten : 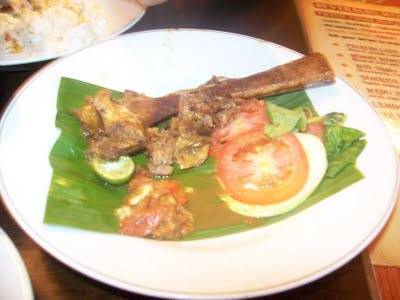 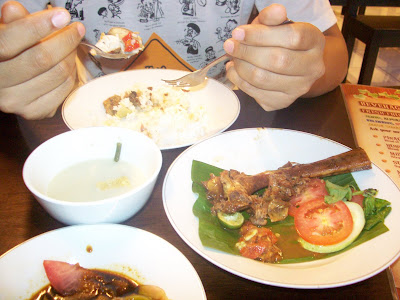 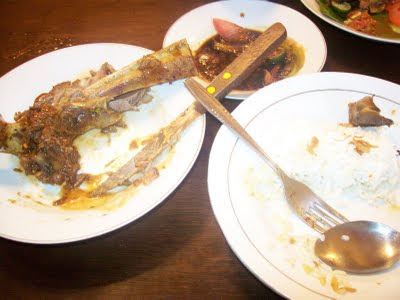 it's so yummy !! it's more tasty than other iga bakar i ever tasted : iga bakar jangkung, iga bakar bubah batu, iga bakar setiabudhi, and else. But afterall, the taste of iga bakar special 250gr tasted like beef sausage from Pizza Hut and the sauce was quite hot. iga bakar blacan is good to taste too. the Pinnacolada is so so because i've ever tasted better than this one, but afterall, it is worth to taste !!
ulasan