i was going home from college. it was afternoon and the traffic was really heavy. listening to music was a temporary cure for me. But my curiosity abruptly boiled when my eyes stucked to a traditional merchant at the sidewalk: Baso Tahu Manohara. Destiny set me up this time. Angkot (Public Transportation) i was in was moving like a snail because of heavy traffic. And that's the moment i could not take my eyes off of it. 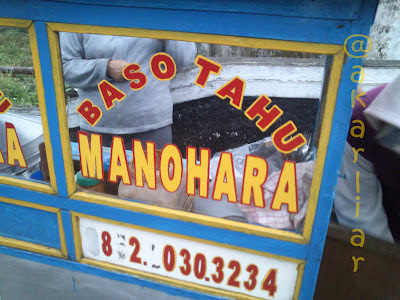 Baso Tahu Manohara was quite attractive to me. Whatever the story behind, it kept my curiosity floating around thinking about it. Whether the merchant as pretty as Manohara or it belonged to Manohara's business empire or it simply was Manohara is the merchant itself. Whatever it is, it worked out to attract me stepped out of angkot. The reason was solely one, to prove my curiosity.

When i came near the merchant, i quickly asked HIM about the Manohara. Well, i was quite disappointed that the merchant was no Manohara at all. But finding out that fact just aggravated my curiosity. And the biggest disappointment when he answered my question flatly, "Hmm..it is just because at that time Manohara was quite popular. She was famous and on tv everyday. That's why i named it Manohara."

Well, none of my assumption proven. I was sad because the reason was unpredictable and it was really flat. it's like That's it ? He told me that using Manohara name, he was quite fortune at selling Baso Tahu. But one thing i realized that the Baso Tahu was worth it. His Baso Tahu was delicious and cheap. Only Rp.500,00/pc. That's why when i eat Baso Tahu, my mind goes associating it with Manohara's cheeks. Funny. Eventhough it is actually nothing to me, well, at least Manohara was a fortune goddess to some people.