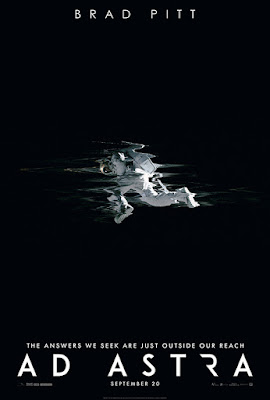 How do you learn to cope with your aloneness?

How do you enjoy your aloneness without turning it into a great sense of loneliness?


Last Saturday I pampered myself with a movie and popcorn. I went to watch Ad Astra (2019) starring Brad Pitt. To contain any overwhelming curiosity, I skipped finding out what was the movie all about. I didn’t peek ahead the synopsis or even the trailer. The only thing that I knew was its title as a literal definition of to the stars. I was simply enchanted by its title and sure that it was going to be a space-themed movie.

For the first thirty minutes the movie was flowing so slowly even though it was opened with a sudden accident in the space. It wasn’t escalating as rapid as I expected, so I thought I was gonna sleep on it. However, when the main character was obliged to save the earth by terminating a spaceship involved on so-called Lima Project and its entirety, I nearly thought the movie was The Armageddon-type movie. Then I was led to another angle to almost believe the movie was about space exploration looking for extraterrestrial life such as Prometheus (2012) or miraculous journey of space oddity such Interstellar (2014). As the plot progressed and the characterization deepened, I was finally convinced that this movie was about neither of what I previously thought. It didn’t follow prior trend of its predecessors and my drowsiness was canceled and I felt intrigued to keep on watching.

Normally space-themed movies elaborate on how humanity stands up against space conquerors, survival on the terror and horror of grotesque aliens, or a fellowship with benevolent extraterrestrial entity.  Conversely Ad Astra serves a basic yet quintessential question in the entire universe:

Are we alone in this universe?

The answer to question above is as simple as either ‘yes, we are alone’ or ‘no, we are not’. Hence, the space exploration. Albeit the simplicity of the possible answer, the movie tries to dive deep on how we answer the question. This movie wasn’t focusing either on the unpredictable menace of alien attacks or merely spoiling eyes with scintillating beauty of the space. It rather mustered its energy on the narration of the story through first person point of view: how a highly trained and reliably calm astronaut could never escape his own memories. The slow pace and its narration clandestinely exacerbated the feeling of unknown that somehow was packed and jostled into something eerily suffocating. The story had successfully made me feel mildly sad with a pinch of piquantness through a contemplation that emotions repressed to appear calm in any sudden calamity will eventually trickle out.

Ad Astra doesn’t follow formulaic success that promotes space resilience and survivability displayed on other movies (Let’s take The Martian for an instance, it is a good movie, albeit predictable), but to survive the mere aloneness inside our mind that can put life in danger. For the complete synopsis and review, you can check Rotten Tomatoes. Here is my two cents on Aloneness in Ad Astra.

When pondering on aloneness in space context, I remember few literatures that center on finding correlation on aloneness and mortality. A research at American Journal of Public Health on prospective study of social isolation, loneliness, and mortality in Finland (2016) reveals that social isolation predicted mortality even with loneliness and other control variables being adjusted. The connection between social isolation and mortality was linear in nature and no synergistic effect between social isolation and loneliness was found. The evidence shows that involvement in social relationships benefits health and lack of social connections is as influential a mortality risk factor as traditional health-related indicators such as use of alcohol, smoking, and obesity. This presents the ugly truth that at some point in life we might have had felt terribly alone at least once and struggled dealing with it. And sometimes this aloneness turns worse into unbearable loneliness.

In Ad Astra the astronauts are shown to regularly get checked for their health and mental state to know the impacts of being conditioned to social isolation. This movie correlates at some level with other social isolation movies which portray the struggle with loneliness such as Cast Away (2000), Into the Wild (2007), One Week (2008), 127 Hours (2010), Tracks (2013), Wild (2014), and The Martian (2015). The only different is space-themed movies always thickens the layer of loneliness and morbidity without even trying to much convey the danger. The space is a vast, massive aloneness which is similar to the void, while the rest of the movies still ornament their plots with Earth atmosphere and elements. Nevertheless 127 Hours has its own perks off all movies mentioned previously. Even though set up on earth setting, it is a crazy good movie that dwells on aloneness and survivability.

Back to the space, an interview video of Astronauts by Time explains briefly how important to keep you physically and mentally occupied up in the space. When the astronauts were questioned what they miss most about earth, they responded indubitably the weather, the sun’s warmth, the air, the rain, and certainly their family. So they were assigned with long hours and crazy work schedule to push their thoughts from thinking what they miss the most. It is understandable that the more you think about what you miss, the more energy you spend in missing them. And In Ad Astra Brad Pitt’s soul of a troubled astronaut is impressively convincing this premise.

After watching Ad Astra I kept thinking that living in space without the sun that warms the earth and creates the perfect environment for all scales of life is simply unimaginable. It is noticeable that brains are evolving in response to social environment and human interaction. And our senses and physical body have got used to the earth specifically elements where we used to grow up in. This is emphasized on one scene in Ad Astra where comfort rooms are provided for psychologically disturbed astronauts. The comfort rooms provide the moving imagery of earth elements and animals with its realistic sound. This implicitly means that nature indeed soothes us as we are cocooned in a thick atmosphere that nurtures and protects for us since the day we are born. We witness vibrant color of life through clouds, skies, rainbows, tress, animals, mountains, rivers, forests, and other landscapes and being able to feel the air, the warm, the cold, sunsets, sunrises, is truly a blessing.

I also wondered how scary it feels to float in the absence of abundant warm light, in the absolute darkness, and blanketed with the coldness of uncertainty. One second you may feel tranquil and at peace, but the other second you will feel the loneliness seeping into your pore because you realize you’re utterly alone with your thoughts in smoldering silence. Overthinking and feeling too much in a socially isolated environment has proven to be a deadly combination. It is literally a solitary confinement where your mental state is being degraded by the claustrophobic-inducing room with same view, same routine, and same loneliness. It feels like diving deep extremely below the surface of the ocean with limited room and oxygen and nowhere to run. You either befriend loneliness or you give up in it. Don't forget you tend to hallucinate when you’re alone. Some researches support that people in solitary confinement whose sensory input are reduced will start making up sensory inputs so that hallucinations are a natural consequence of being isolated.

To put the cherry on the top, a research on typologies of loneliness, social isolation, and living alone and their associations with physical and mental health was conducted by Smith and Victor (2018) from Cambridge University. It reveals that high loneliness, social isolation, and living alone have strong relationship with depression. It is also noticeable that compared to low loneliness and no social isolation, people who have high loneliness may develop depressive symptoms. Previous findings also suggest that they are associated with health outcomes such as poorer cognitive functioning, cardiovascular diseases, poorer self-rated health, and worsened physical functioning and lifestyle.

That is why space station astronauts need to exercise at least two and half hours to maintain baseline health and keep in touch with their family on earth. By exercising we trigger serotonin, endorphin, oxytocin, and adrenaline. And we on earth get really conditioned to comforts where we can access sports and entertainment naturally, yet we often feel lacking of them. And when we conduct social interaction and human contact, we lower our loneliness level and risk of social isolation. In Ad Astra the main character’s state of mind was deeply hacked by his memories and past experiences of losing people he loved and it can be easily seen that he suffered from repressed loneliness which resurfaced when he was alone in a long-haul space journey nearly ending.

On the other hand Ad Astra signifies that space exploration has been always a fascinating subject. Perhaps because it provides a possibility to look for another home in space and find another life. It is mentioned on the movie that Drake equation boosted the development for space exploration even though it is not practical. It gives a sheer possibility to acknowledge the number of lives in the universe. It is perhaps a metaphorical statement that we are craving for another companionship in this incredibly cosmical universe.

In the end Ad Astra tries to point out a very simple purpose of human existence: to connect with the surrounding so that they can amplify the meaning of their minuscule existence. It means we can go meticulously scanning the entire universe to find out that whether we’re alone or not, but we often forget to forge the social connection within our surrounding. It also tries to convey a powerful message to embrace the past, rather than hiding behind it or even severe it. This is what I like most about this movie. It is a simple attempt to answer a mind-boggling question whether we’re (able to get) alone or not in this entire universe. We still need to remember we should end up being with people who we consider close and reach out to them; even though we need to travel faraway to simply embrace what has broken us in the past. After all whatever the environment is, loneliness is always lurking in the darkest corner of our mind and waiting to steal a spotlight in our life as we always try to extract meaning in our mundane lives. We can only accept it and release it through profound connection with our surrounding, or deny it and let it gradually swallow us.